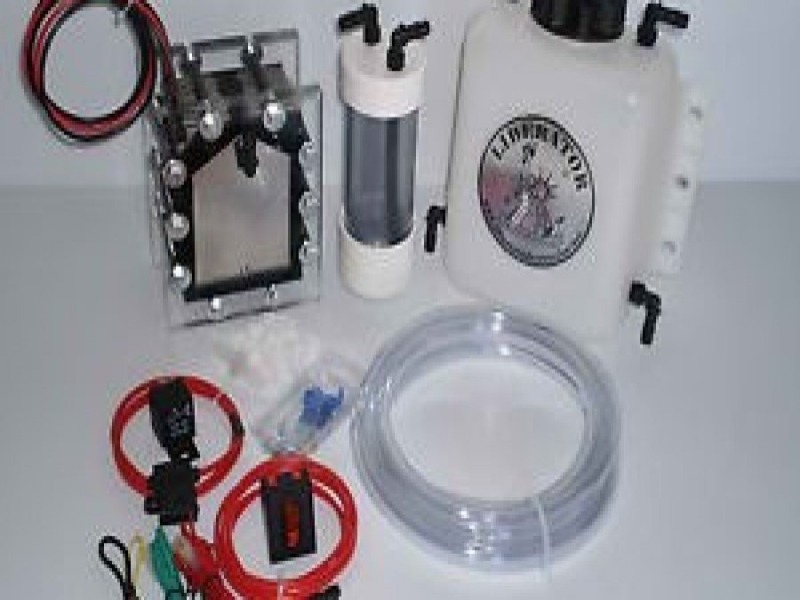 The more you look into the CC-16 the better it gets!

In the world of hydrogen-based engine cleaning, there are certain catch words that should make you think twice about a product. Increasingly ‘dry cell’ is just such a term.  A dry cell hydrogen generator kit can be picked up online for around £200 and run off a 12v supply. These generators are generally used as fuel additive generators within the engine. Because of their small size and low voltage, they fit well under the hood and run off the battery. Needless to say as a solution for engine carbon cleaning they are ineffective, unreliable and have been known to cause damage to some engines. It is wise to remember how highly combustible HHO gas is and the importance of safeguards to make sure the gas is only being burnt where you want it to be burnt and not filling up your workshop. Flow regulation is a key factor in safely burning HHO in the engine. Too much gas being sent into the combustion chambers can cause temperatures of 3300, hot enough to risk piercing a piston head or warping valves. Not enough gas and you could be waiting a few days to clean one engine.

Photo 1. Dry Cell inside the box

Photo 3. Dry Cell after 1 year in use

Still, there are some companies out there who have been buying up just such kits, putting them in a metal box and charging upwards of £1000 for their product. We find it a great shame that such progressive technology is being treated in this way with possibly catastrophic results. If you are looking to embrace HHO cleaning in your workshop it is wise to get as many details as you can about the contents of the machine you are about to invest in.

This is not to say that all dry cell generators are a bad thing. They are a solid alternative to traditional wet cell generators. First, though, let’s clear up a few points – ‘Dry’ cells still require a reservoir of water to function so ‘dry’ is a little misleading. The anode and cathode elements are not fully submerged but are set up as a series of alternating plates separated by a none conductive material (usually neoprene) and the water is fed through holes in each plate. The water is then cycled back into the reservoir carrying the gas with it which escapes through the top of the reservoir.

Not submerging the entire anode/ cathode in the water tank (as an electrolytic tank cell does) is done to increase efficiency in the belief that much of the electric current would pass through the edge of the plate and be wasted in terms of HHO production. This is not particularly true. In fact, wet cells charge the water around them turning the cell into a capacitor or power reservoir. The extra voltage therein is used to boost HHO generation and gives the user more flexibility to control the excess power and amount of HHO produced at any given time. This is very useful when producing HHO for cleaning engines of varying sizes but not so much for producing a set amount as a fuel additive. So we can conclude that a dry cell may be the best option under the hood of your car but the electrolytic tank is the best and most flexible solution for HHO engine cleaning.

The smaller units running from 12v would struggle to produce enough current (generally running just under 1KW) to split the volume of water needed to produce the gasses required to efficiently clean an engine. Under normal conditions (1 atmosphere of pressure and 1 mole per liter of H+ ions) you need 1.23v to split water into hydrogen and oxygen. Since Power = Current x Voltage we can get the current by dividing power by voltage. 1000W / 1.23V = 813amps. Running for one hour (813amps x 3600seconds) we get 2.93 million coulombs of charge. One mole of electrons has a charge of 96,500 coulombs. If we divide the machine’s charge by the charge of the electrons this gives us around 30 moles of electrons flowing per hour. For a water molecule to split 2 electrons have to flow meaning 30 moles of electrons would split 15 moles of water into 15 moles of hydrogen and 7.5 moles of oxygen equating to 350 liters of hydrogen and 175 liters of oxygen. With this amount of HHO being produced it would take upwards of 2 hours to clean a 2-liter engine.

The CC16 runs at 4KW, therefore, producing 4 times as much HHO giving it the ability to clean a 2-liter engine in just half an hour. With 9 electrolytic tank cells, each individually monitored and controlled by the onboard PCU, the current is kept constant as is the flow rate of the machine. Even if a cell stops working for any reason this would be picked up automatically and power would be redistributed to the other cells. This is impossible to achieve with current dry cell technology; with a single cell when it breaks down it will completely stop working.

The CC16 can be programmed to produce the required amount of HHO defined by entering the engine displacement at the start of the service. Even if one of the cells, where to stop working more power, would be displaced to the other cells maintaining a constant production of HHO at the required level. The dry cell machines have a single constant flow without the option to regulate volume. In most cases, this is a mere trickle of gas but some cases have been found to produce far too much in a single draw leading to engine damage.

The CC16 features a charge activated shutdown connected to the vehicle’s battery. This safeguard monitors the different charge coming from the battery when the engine is running or stopped. Should the engine stop running during the clean the HHO would not combust in the engine. The CC16 would notice and stop producing HHO gas which could escape and cause a hazard. Other safety features like flashback valves, water level, and heat monitors have been incorporated into the CC16, during our development of the machine, but are seldom seen on the dry cell units which scarcely even feature a PCU.

We are confident in saying that that the CC16 is the best HHO cleaning solution in the world when compared in terms of efficiency, safety, longevity, and ease of use.

This website uses cookies to improve your experience while you navigate through the website. Out of these, the cookies that are categorized as necessary are stored on your browser as they are essential for the working of basic functionalities of the website. We also use third-party cookies that help us analyze and understand how you use this website. These cookies will be stored in your browser only with your consent. You also have the option to opt-out of these cookies. But opting out of some of these cookies may affect your browsing experience.
Necessary Always Enabled

Any cookies that may not be particularly necessary for the website to function and is used specifically to collect user personal data via analytics, ads, other embedded contents are termed as non-necessary cookies. It is mandatory to procure user consent prior to running these cookies on your website.